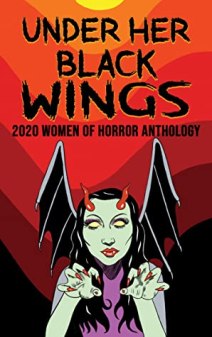 Title: Under Her Black Wings – 2020 Women of Horror Anthology

It’s odd sometimes in the book world how things can get missed. Somehow, I completely missed checking this anthology out when it was announced at the start of the year. Now, whether that was because it was offered up on Kendall Reviews and someone else snagged it, or simply because there is SO MUCH amazing work coming out, for whatever reason, this wasn’t even on my radar until just last week, when Sonora Taylor put me in touch with Jill Girardi of Kandisha Press about reviewing Vol. 2. Jill asked if I’d like to check out Vol. 1, which I happily agreed to read. I devoured Vol. 2 in one sitting. It was amazing. I immediately dove into Vol. 1 once finished and over the course of a few days, cruised through this anthology as well.

What I liked: ‘Under Her Black Wings’ brings a stunning variety of women authors, who all put their soul into creating some truly bleak stories.

The anthology opens with the amazing ‘What You Eat’ by Alys Hobbs. Much like Vol. 2 opened with a fantastically strong story, Vol. 1 uses that story to spring board into tale after tale of blackness and biting scenarios.

‘The Riddled Path’ by Somer Canon creeped me the hell out, ‘Desert Kisses’ by Michelle Garza & Melissa Lason reinforced why the Sisters of Slaughter are a force to be reckoned with (and I still need to get to their long work, sheesh!). In Vol. 2 one of the strongest stories was ‘Love You to Death’ by Yolanda Sfetsos. Here she is, featured in Vol. 1 as well and her story ‘Somewhere to Belong’ once again stands as one of the top dogs. Seriously, give her work a read. Her Short! Sharp! Shocks! release was outstanding as well.

‘Cold Calling’ by Paula R.C. Readman had me completely captivated. Readman also was in Vol. 2 and again – another of the S!S!S! family you should read.

Personally, I think my favorite was Jill Girardi’s. Her story ‘Firstborn’ was not only super intense and emotionally ravaging, but the subject matter was very refreshing. It’s not often we get middle eastern based horror stories (and I probably messed up on my region labeling) but wow! Loved that bit of folklore!

What I didn’t like: Much like Vol. 2, this will feel like a cop out, but there really isn’t anything I wasn’t a fan of. While Vol. 2 was so strong I had suggested it might’ve made sense to cut it into two releases, Vol. 1 felt perfect in it’s story quantity and the flow was done just right.

So, to be fair to my own reviews, I’ll give the company line of “some stories that I liked may not be the ones other readers like.”

Why you should buy it: Look, I’ve been singing this loud and clear for what? two years now? SUPPORT WOMEN AUTHORS IN THE DARK FICTIONS! These stories were fantastic and there is some theme or narrative that will make each reader go “WOW!”

I absolutely dropped the ball here. I should’ve read this when it came out, but I have now and for those out there who have also missed it – time to fix that.

I would highly recommend you pair Vol 1. with Vol 2. They work so well as a pair and I think seeing as Vol. 2 is arriving in four days now, I can’t imagine we won’t get a Vol. 3.

Kudos again to Kandisha Press for their diligence in putting together two truly amazing anthologies.

One thought on “Book Review: Under Black Wings – 2020 Women of Horror Anthology”