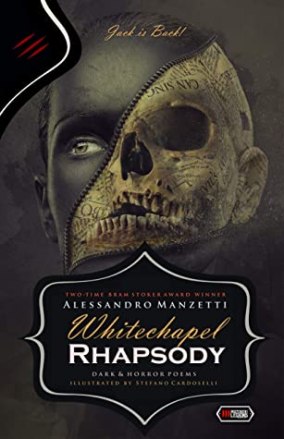 Alessandro Manzetti has been a name I’ve seen pop up time and time again with his stunning Independent Legions Publishing as well as his releases and frequent Bram Stoker Award consideration.

I personally, and shamefully, didn’t take the plunge into his work until I devoured the absolutely bleak ‘The Keeper of Chernobyl’ recently.

Much to my surprise and shock, I recently received a Facebook message from Alessandro, asking if I’d be at all interested in his newest release ‘Whitechapel Rhapsody: Dark Poems.’ Are you kidding me?! Awe-struck. Manzetti is a dark fiction giant in my eyes. Truly humbling that he’d even think of me to begin with.

So, I absolutely accepted, and once it arrived in my email – straight to the Kindle where I tore through it in two sittings.

What I liked: Whitechapel, an infamous district in East London. Known for the alley way murders from 1888-1891. Home to the legend that is Jack the Ripper. It is from this set up that Manzetti dove into a retelling of the serial killers rampage. Told from a few points of view, Manzetti crafts a seemingly one-man play here. Going from sorrow to manic, gleeful and odd, we get every emotion at play as the characters come to grips with what is going on.

I am far from any sort of poetry expert. But what I can say, is that Manzetti goes from two line rhyming to three or four line spurts of prose with the ease of a painter laying down color on a canvass. It creates a sense of reading a story that is interspersed with song lyrics.

With 26 poems featured in here, I was intimidated at first to think if anything would stand out as my favorite, but when it was all said and done, the combination of FROM HELL and MARY JANE (A Violet From Mother’s Grave) truly stole the show. I hope Manzetti doesn’t mind, but look at this little snippet from FROM HELL;

Do you hear them crackle?

No, they don’t feel pain anymore, but anyway they cant scream,

And open their tongueless mouths yawning smoke, before melting.

This is how all things end,

But the hunt for the monster is always open.

I mean, really? Jesus, if that isn’t the most cinematic moment of brutal darkness I’ve ever read, I don’t know what is. Just pure filthy gruesomeness. Amazing stuff.

What I didn’t like: I mean, I created this section to try and remain fair and give a reason why some readers may not enjoy this. It gets tough when I adore a book as much as this. So, if there was one thing I would mention, it was that as much as I don’t like chapters/stories/poems with dates to indicate when they happen, I kind of wish each on had that feature here to really follow along with the timeline.

Why you should buy this: Manzetti is a stunning writer and the visual scope he created here is truly phenomenal. Each poem is layered with single poem story and over-arcing story, creating a thematic connection that really forces the reader to gallop along. I also want to mention the stunning artwork/illustrations that feature in here. Stefano Cardoselli really adds to the feel of each piece of work.

Outstanding stuff from a master at the height of his craft.