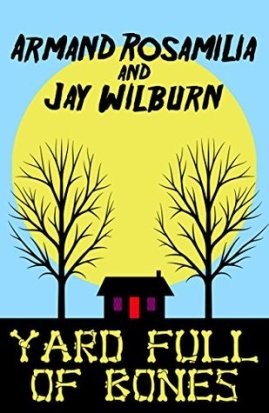 If you’ve been around the Horror Community for any length of time, you’ve inevitably interacted with Armand Rosamilia. Armand is one of the nicest guys out there, always working to support and promote and has been super encouraging. It was through Unnerving that I first came across this book and I’ve long been meaning to read an Armand release. Saying that, a number of people have also been recommending to me that I check out Jay Wilburn’s work, so this was a nice trifecta of support; Unnerving, Armand and Jay, all in one shot.

What I liked: ‘Yard Full of Bones’ starts off with a stunning opening chapter. Hollywood producer/writer Mel sits on his couch in his home, only to have intruders slit his throat. From there, the mystery surrounding Mel Silver’s death and the struggles of his estranged husband Brock and assistant Gloria begin. Not only are they trying to understand just how and why Mel was murdered, but they themselves fall under suspicion of being the murderers.

It’s from this leaping off point that Wilburn and Rosamilia craft a murder mystery that also falls into folklore/creature based horror. This was really well done and the introduction of Mel’s former life in Vermont was fantastic and incredibly creepy.

The two authors write great together, with a singular writing voice propelling this story. I loved how the distinct genre’s meshed together and the characters had so much depth that I equally hated and loved each one of them, as more and more of their personal stories come out.

The ending in this was top notch and from what came before, very satisfying. With having a book start so imbedded as one thing and morph into something completely different, they handled it with expertise.

What I didn’t like: Two things really. The first was that it took a very long time to progress from Mel’s passing and his memorial/funeral to Brock and Gloria heading to Vermont. There’s a bit of a slower section during this where it felt a bit like we were spinning our wheels in some mud, but once the car popped out onto dry land, this thing took off. The second was the character of Felix. More specifically the early interactions between Felix and Brock. I struggled to understand why Felix was so aggressive with Brock considering the recent death of Mel. I can’t say too much more due to spoiler territory but during the first half I hated whenever Felix appeared.

Why you should buy this: The duo of Rosamilia and Wilburn have churned out a really fantastic read with ‘Yard Full of Bones.’ As the story moves along and more and more pieces come to light, the intrigue will grab you, but when they arrive at Vermont and they introduce this creepy small town to the reader, you’ll be hooked. This was a really well done story and one I’m so glad to have finally dove into and read. I’m definitely going to be checking out more by both authors but for new fans, I think this would be a really great diving in point.