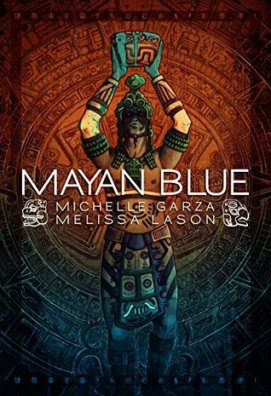 Authors: Michelle Garza and Melissa Lason aka The Sisters of Slaughter

From the very first day that I entered into the dark fiction community, Michelle and Melissa have been cheering me on and encouraging me every step of the way. I’ve been recommended their work time and time again, but it was ‘Mayan Blue’ and ‘Tapetum Lucidum’ that really stood out for me. (I’ll be starting Tapetum shortly!)

‘Mayan Blue’ always interested me as I’ve always been intrigued by Xibalba and the Mayan lore of the Underworld. The Mayan Death Gods, specifically Ah Puch, have always got my imagination running and because of this, I wanted to see what type of carnage the Sisters of Slaughter could conjure up.

What I liked: The story begins innocently enough. Four college students and the Professor’s Assistant hike into the Georgia wilderness. They’re off to meet up with the Professor of Archaeology who has discovered a doorway in a cave, that he believes is Mayan. Little do the group of five know that the Professor has accidentally disturbed things that should never have been disturbed.

From this point on, Garza and Lason craft a story filled with survival and brutal, brutal moments. As the Gods of Death march forward and lust to capture the humans and bring them to the massive pyramid for sacrifice, the humans struggle to stay alive, even if they don’t know it’s already too late.

There are some gruesome scenes in here, scenes that rival anything Barker ever conjured. We get tons of blood, amazing progression as the various creatures get their moments in the spotlight and we see just how much each of the humans themselves, want to stay alive.

I really enjoyed how fast-paced this was and how vividly each of the underworld incarnations were described.

What I didn’t like: Two things. The first was, I felt like three of the five individuals were there just to be slaughtered. I didn’t get enough of them or their actual personalities to care much about them and the one woman was incredibly annoying. The second, was I wished there was more background on the lore surrounding what was to come. I felt like I had to play catch up as various levels and events happened and some characters filled the reader in after. Minor, but I think some parts would’ve made more sense.

Why you should buy this: Absolute, underworld blast. This was a really fun time, with a ton of Mayan history and anytime you can get a horror story based around Xibalba, the reader should be happy. The twosome crafted a really frantic, high-energy story and I loved how we saw things go darker and darker. Great stuff!