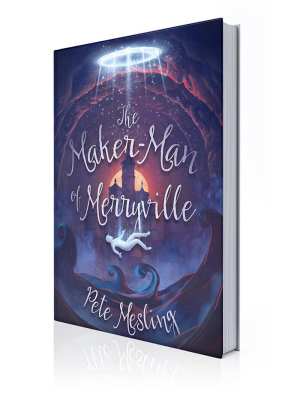 Title: The Maker-Man of Merryville

Huge thanks to Pete Mesling for sending me a digital ARC. When he announced this one, I was super pumped and reached out to him right away.

I’ve only read a short story collection by Mesling previously, and was rewarded with some outstanding stories. Mesling is a veteran writer, so I was keen to see what he’d craft diving into a world that felt like a combination of ‘The Thief of Always’ and ‘The Graveyard Book.’

What I liked: The story follows a familiar premise where a new store in town opens and our main character, Gilbert, is given a concoction called ‘Away Putty.’ This putty has the power to open up a portal to another place. Gilbert is greatly intrigued. Merryville, his home, is anything but, and he longs to see people happy and smiling. To Gilbert’s surprise, the putty works, a portal is opened and accompanied by his new friend, Sarah and her toy she also got at the store, they cross over.

It’s from here that Mesling really shines and focuses the story on the idea of just what kids curiosity can cause. They ask questions, some innocent, some pointed. They meet strange creatures, some nice, some terrible, and at the end of the day, they learn the power of friendship and why Merryville isn’t merry anymore.

The story really was an amalgamation of a number of 80’s fantasy movies/books and it worked really well to see how Mesling was able to highlight key parts and fit them into his own story.

What I didn’t like: There were moments that were ultimately overly predictable, but that comes with the territory of me being 40 and this book written for a younger audience. It still worked well to push the narrative, but those twists and turns were things I saw coming well before they occurred.

Why you should buy this: This would be an excellent ‘gateway’ story for any young readers in your house, that could introduce them to fantasy and dark fiction. I would even suggest, this would make for a great buddy read if you have any 10-13 year old’s who are just getting into this type of work.

If you don’t have kids and want to just dive into something that’ll make you smile and make you feel nostalgic in places, this would be an excellent book to do just that.

2 thoughts on “Book Review: The Maker-Man of Merryville by Pete Mesling”