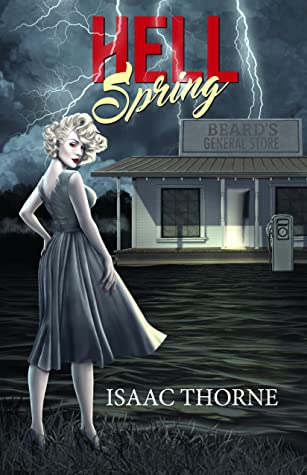 Some reviews are tougher to write, I find, the longer I’ve been reading and leaving reviews.

I really enjoyed Thorne’s debut – ‘The Gordon Place,’ and loved the location. So much so, that when Isaac reached out to see if I’d be up for reading this one, also set in the same place, I was all over it. There’s something about that singular connectivity that really works to draw a reader in – look at King and more recently, Malerman and Baxter.

I was also really, really intrigued with the setup. Almost a reverse or flipped ‘Mist’ idea – instead of a heavy storm/fog rolling in, the characters are stuff in a General Store in 1955 when a flood occurs. Of course, this is a horror novel and there’s something out there that comes in and this is the main aspect of the entire novel. The discovery of the truth within the confines of the store.

Thorne did a solid job on a number of aspects, but I lament the missed opportunities.

What I liked: As I said, the story takes place predominantly within Beard’s General Store, those lucky enough to escape the deluge and flood waters take stock in their surroundings, but also with the other folks present.

Thorne does a fantastic job of creating a wide cross-section of society, and we see how the residents of this small town are God-fearing people, worried that anything they do will prevent them from eternal bliss in the afterlife. It’s this aspect that really dominates the story and becomes the be-all end-all for survival.

There’s a lot that goes on inside the pages, but at the same time, not a lot. It’s hard to describe and I’ll attempt to dig deeper in a moment, but Thorne does a great job of showing the rapid decay of acceptable behavior in a cramped space between the people.

What I didn’t like: I think this would’ve worked significantly better if this was a novella instead of a novel. There’s sections that have a lot of extreme ‘fluff’ in parts that seemed to take away from the flow of the story as well as the tension and the acceleration.

Additionally, the form that the entity takes (Marilyn Monroe) really drove me crazy. I’m not a big fan of moments like these, as it takes away some of the imaginative aspects of it for me as a reader.

Why you should buy this: Overall, I did enjoy this one, I just didn’t love it. It felt good to return to this place that Thorne is creating and the cross-section of characters was a bonus.

Thorne did a great job of creating some chaotic moments and for that, I was able to get past the extra ‘fluff.’

I think this one will be a love it or leave it book for many people. The meat is there, solidly on the bone, I just wish it had less gristle.

One thought on “Book Review: Hell Spring by Isaac Thorne”